This week we had a local York Doctoral Symposium (YDS) which has been taking part in The University of York since 6 years ago. It was a very nice event in which several works in the form of full papers and extended abstracts in different areas of Computer Science and Electronics were presented, and despite the fact of being a local symposium it received several works not only from The University of York colleagues, but also from other UK Universities, even one paper from a German one !!

Regarding my interests (better said area of knowledge, because there were other very interesting topics) there were only a couple of papers related to Model-Driven Engineering: one of them presented by one colleague in the Enterprise Systems group, Athanasios Zolotas, related to DSLs for Web Application Development Processes; and a second one presented by me :), from which I must confess that I received an unexpected surprise at the end of the night... 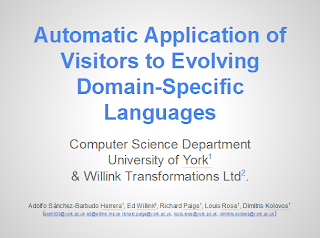 Since quite while ago, I've wanted to blog about QVT (which stands for Query/View/Transformation) Operational Mappings. QVT is the open specification established by the Object Management Group (OMG) in order to define Model to Model (M2M) transformations. M2M transformations are a key part of Model-Driven Engineering (MDE), and having an open specification which leans towards an standarized way to describe them is simply what I want and pursue. Unfortunately, there hasn't been too many tools implementing this specification, being other M2M transformation languages, such as ATL or ETL, more popular.

QVT consists of three languages, two declarative languages called Relations (QVTr), Core (QVTc) and a third imperative one called Operational Mappings (QVTo). Today, I'm talking (including some Eclipse QVTo updates :) ) about the last one since it's the language which I'm mostly familiarized with...

It has passed some time since my last blog entry. Tomorrow, a new month begins and I haven´t wrote anything during June !!!. In this update, I´ll simply mention some of the activities I´ve done, which basically are focused on EngD Modules and Release Engineering activities for the new Eclipse version (A.K.A Kepler) which was released this week:

Today, I've been surprised and excited by a new Eclipse Kepler feature which should have come up with the last milestone (M7). I guess that more than one time you must be hit by the issue in which you want to update your Eclipse installation or some components of it and the IDE doesn't allow to do so because some prerequisites violation. Moreover, it's not trivial to realize what exactly is going wrong with the current installation configuration and the new components you want to install/update: 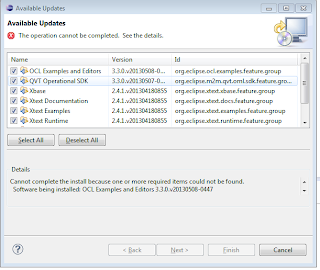 Email ThisBlogThis!Share to TwitterShare to FacebookShare to Pinterest
Etiquetas: Eclipse

Beyond the Obvious: Experiment results

Today, I wanted to share the results of the experiment I run about the reasoning of why my housemates were not collaborating in throwing away the rubbish of the house. As I commented in that post, the goals of the experiment was two fold:

After some days from the 26th of April, in which I put the new "gentle form" close to the bins to track who was throwing the rubbish away I decided to take a picture the same day I did that task again. Here we have the results:

Are you aware of "If This Then That"

Today I´ve signed up to a new promising web application which could help you in the task of social networking. Well, when I say new, I mean it´s new to me. I´ve been a little bit reluctant to deep into the world of social networking, but at some point I find it quite interesting. Now that I´ve started to blog again, and soon as you have more than one channel in which you usually come up, you suddenly feel the necessity of having "one tool to control them all" ;).

Email ThisBlogThis!Share to TwitterShare to FacebookShare to Pinterest
Etiquetas: Tools

This week I've been very entertained with a new module of the Engineering Doctorate I'm doing at the University of York. Prior to the module lessons, I had my first talk in a seminar meeting for some of the Enterprise Systems Research Group's colleagues. Although I think that there were no more 10 people in the room, I found it as an ideal opportunity to start to show some mates the stuff I'm working on, and more interestingly, to detect any interest and spark new possibilities of collaboration around the topic. 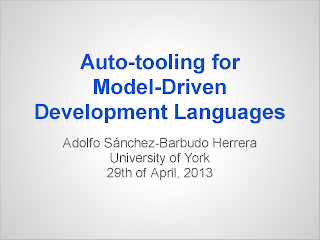